The Dream Wanaderers by Rhythm Method©

Maurice was born in Harlem, New York City. It is said his appreciation of music began with the Apollo Theatre, where his mother would often catch a matinee while still pregnant with him. He grew up on Staten Island in a musical neighborhood where inspiration was everywhere. There were the sounds of conga drums in the parks in summer and gospel music at church on Sundays. He learned to love jazz from his dad, Elliot Oliver. Through junior high and high school Maurice played drums and orchestral percussion and began to perform with professional musicians. For many years he lead rock, blues and jazz bands, performing around the East Coast in clubs, festivals & cultural events.

At The Julliard School of Music In Manhattan, Maurice studied orchestral percussion, majoring in tympani. At The New School of Social Research he studied with such great artists as Oliver Lake,  Sam Rivers, Karl Berger and Jimmy Guiffre. He studied electronic composition with John Watts, founder of The Composers Theatre in NYC. In the 1980’s Maurice received grants from the New York State Council for the Arts, and The New York Urban League, as well as The Composer’s Award and the New York City Council for the Arts Grant for percussion workshops in public schools.

Living in Amsterdam for a few years provided Maurice an opportunity to perform and write music in other genre and collaborate with musicians from around the world. He learned to play West African drums, such as talking drum, djembe and baliphone with master drummer Babatundi Olatunji, and studied Afro-Brazilian rhythms with Airto, Ciro Baptista and Nana Vasconcelos on traditional instruments such as the quica, agogo, caxixi and berimbau. Jo Papo Dadiego brought expertise in Afro-Cuban music as well.

Maurice founded the band, Rhythm Method, with his brother Steve  The band featured live percussion, keyboards and guitar and performed in such renowned venues as the Melkweg/Milky Way in Amsterdam and Exit and Tressor in Berlin. Rhythm Method was one of the first American bands to perform live at the Love Parade in Berlin. In New York City the band performed regularly at The Limelight, The Shelter, The Ritz and The Roxy. Under Maurice’s leadership, Rhythm Method released “The Future EP” on Adrenalin Records in 1993. In 1996, the album “Dream Wanderers” was released with C&S Records. He wrote the song, “But You Must” for the Killing Zoe soundtrack, Milan Records/BMG.

Their most acclaimed song, “Goa Season of the Monsoon” was included on the compilations, “United State of Ambience” on Moonshine Records and Trance Masters 2 on Vision Sound Carrier Records. In 2005 Maurice founded Chill Factor-5, and Electronfarm Records Ltd. As vehicles to express his new musical direction, and independence from the traditional music business machine. The first release 2005’s “A Heartbeat Away” was widely acclaimed in the electronic, pop, and jazz circles. Chill Factor’s groundbreaking “Sun Flower Jazz” garnered a Grammy© nomination for album of the year, eclipsing 1200 other releases for the fifth spot in the final nominations. Electronfarm Records is now one of the most respected, and widely distributed small labels in the world. Electronfarms  digital distribution through The Orchard.com, with physical distribution by Amazon.com.

There are times in a musician’s life where there is a burst of creative growth and a need to express that new maturity through their music. The new release Between Two Worlds by producer Maurice Oliver AKA Chill Factor-5 is just that kind of album. In fact, Between Two Worlds is really two albums in one package!

Album Meditations, is a collection of songs using sacred math, hybrid acoustic and electronic instruments, as well as live recordings of exotic environs, found sounds, and kitchen objects. The music starts very simply, but with much emotional feeling, and as you relax you are drawn into a new environment. You will find yourself traveling on a sonic journey the Chill Factor-5 style. You will musically travel from the beaches of India with East Of Goa, to the mountain valleys of Nepal with The Great Spiral, and deep into the jungle to the ruins of The Temple Of Spirits, hover with the UFO’s above the Pueblos in the American southwest with the Sky People, splash along the beaches of Jamaica where Rastafarian mystics enlighten us in Water For Life.
Album Euphoria, is Chill Factor-5 in full party mode, dropping funky grooves like Ring Of Truth, nu-jazz fusion vibe of Whose Fooling Whose, the Brazilian Funk A Joy Full Noise. Deep Jazzy House brings the party to your backyard. Indian Summer is sexy like NYC on a Saturday night, bring out the tribal drums and celebrate Midnight. Makayla where world beat meets Chinese traditional instruments, and Rave to Northern Lights.
These tracks are a unique electronic/acoustic blend that defines the sonic sound of Chill Factor-5 and Electronfarm Records, it will remind you of the early sound of Rhythm Method.
“We’re Astral Travelers; we travel from dimension to dimension.”

Maurice is now a Remixer for the legendary Fania Records & Codigo Music.  Fania Records will be releasing an EP of remixes created by Chill Factor-5, of songs by Roberto Blades, Bobby Rodriquez, Pete Conde Rodriquez, and Celia Cruz. 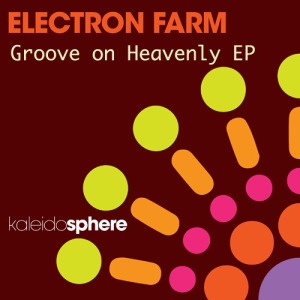 Hot on the heels of his debut Part of the Plan single, Electron Farm frontman Maurice Oliver returns to KSphere with his new Groove on Heavenly EP! Groove is the operative word here when talking about this release. The title track “Groove on Heavenly,” hits us with a nice deep flowy rhythmic that may compliment tunes on the lighter side of AME and Loco Dice. Effective and yes, groovy. His Indian Sumer remix compliments the original nicely adding a twinge of quirky synths and a quick electric guitar looped riff. Next up is “What We’re Doing” and although it comes in strong with a thick beat and urban vocal sample, it evens out to a cool head-nodding rolling 4/4 that ‘s becoming quite the signature sound. His Creole remix gives us even more of that really good musical head. Electron Farm has always had his own special brand of world rhythms, grooves, electronica and jazz. He’s performed at the Melkweg/Milky Way in Amsterdam and Exit and Tressor in Berlin and was one of the first American bands to perform live at the Love Parade in Berlin, and NYC’s The Limelight, The Shelter, The Ritz and The Roxy. This is sure to be a well-received second release EP, so crank it up!

KILLING ZOE – SOUNDTRACK  “But You Must”  Milan Records BMG Dist. 1994

Here is what the Taste Makers are saying!

Electron Farm: Part of the Plan

“This is rock solid funkafied!

Would love to support your music, please contact us for

“Awesome Track! The production is on point! Will add!”